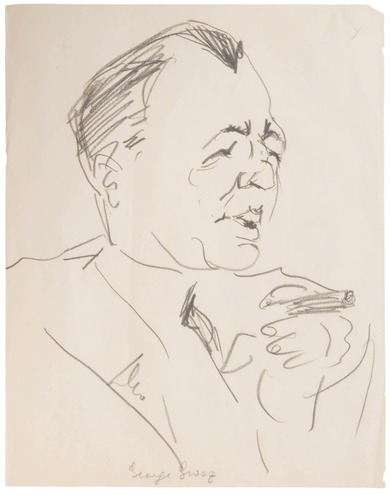 [The fire behind this satire was, and the reason why this satire was also biting and caustic, was because I had a great deal of hate in me. But when I arrived in America, I was at the same time making a kind of dream come true. [...] I simply left that hate, that hate in me, behind. (ed. trans.)]

George Grosz speaking in an interview in 1954

In 1932, the painter George Grosz received an invitation to teach at New York’s Art School, the Art Students League, upon which he embarked on his journey to the USA without delay. The attitude towards art held by the one-time communist, member of Berlin’s DADA scene and critic of German bourgeois society had already begun to change at that time and he no longer saw art first and foremost as an instrument for improving people and society. Critics later accused him of turning his back on political matters. Klaus Mann wrote the following in a Parisian exile newspaper in 1936: “He has become ‘unpolitical’ – or is trying to be so. […] He is no longer drawing; he now paints.”

America and New York in particular gave Grosz a new lease of life, which is evidenced in several sketchbooks that the painter filled while out and about in the city. In the middle of January 1933 he returned briefly to Germany, but the seizure of power by the Nazis made a permanent return impossible. Grosz was given US citizenship in 1938.

In the USA Grosz mainly worked as a drawing teacher. At first he attempted to continue his political works, but was unable to once again attain the artistic successes he enjoyed in the Weimar Republic. Grosz painted using oil as well as creating many landscape paintings and watercolours. Many of his works depicted apocalyptic scenes and dealt with war, death and loneliness. Grosz became increasingly withdrawn and turned more and more to alcohol. At the end of the 1950s he considered returning to Germany and ultimately resettled in Berlin in 1959 where he died in the same year.