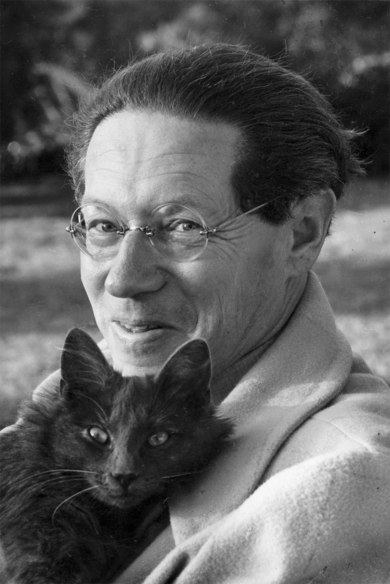 [Where writers are in exile is often where historical novels arise. (ed. trans.)]

Lion Feuchtwanger heard about the Nazi assumption of power while he was in the USA for a lecture tour. He decided not to return to Germany. At this time, his historical novels Die häßliche Herzogin [The Ugly Duchess] and Jud Süß [Jew Suess], which deal with anti-Semitism in Europe in various historical eras, already had an audience of millions in English-speaking countries.

Feuchtwanger initially settled in Sanary-sur-Mer in southern France where he set up his “Weimar on the Riviera” in Villa Valmer. A network of exiled persons formed around him – including the likes of Bertolt Brecht, Arnold Zweig and Thomas Mann.

To draw immediate attention to the political changes in Germany while it was possible for Feuchtwanger by writing novels, he and Brecht together founded the exile newspaper Das Wort [The Word] in 1936.

After Hitler took France, Feuchtwanger was detained in the Les Milles internment camp in spring 1940. He managed to get smuggled out of the camp dressed as a woman, escaped by foot over the Pyrenees, and entered the USA in 1941.

To keep his work translatable, Feuchtwanger wrote in simple language while in exile. He chose the historical novel as a medium for anti-fascist resistance. He hoped to find timeless truth by recording historical proceedings and he published his novels frequently, in order to react to the political situations immediately.