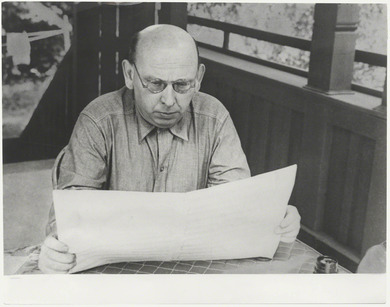 [Brecht – and I – produced far more during our emigration than ever in our lives before. That doesn’t mean we should suggest that emigration is a source of production, but the fact should be mentioned. (ed. trans.)]

From 1919 to 1923, Hanns Eisler was a pupil of the composer Arnold Schönberg. He was closely affiliated to the Communist Party of Germany and wrote for workers’ choirs and agitprop groups. 1927 marked the beginning of a close friendship and working relationship with the writer Bertolt Brecht. Compositions for films became a reliable source of income for Eisler, which he could later build upon when in exile in the US.

After the Nazis came to power, Eisler first fled to Paris; the start of an uneasy, migratory life through Europe and the USA. In January 1938 he travelled to the USA for a lecture tour on a visiting visa. During this trip, he was supported by the American Guild for German Cultural Freedom for three months. At the end of October 1940, Eisler was permitted to permanently settle in the USA.

In the USA, Eisler continued to compose political pieces and did not deny his Communist leanings. He was inspired by the cooperation with Brecht and took further inspiration from literature. The Kantate im Exil [Cantata in Exile], produced in 1937, was based on a novel by the Italian Communist writer Ignazio Silone.

In 1942 Hanns Eisler moved to California with his wife Lou, where they enjoyed the company of Theodor W. Adorno, the actors Helene Weigel and Fritz Kortner, as well as the writers Lion Feuchtwanger and Bertolt Brecht.

In October 1946 the first article in a press campaign against Eisner was published in the Hollywood Reporter. His commitment to Communism led to a hearing before the House Committee on Un-American Activities (HUAC) in 1947 and eventually deportation from the USA in 1948. Many prominent artists and intellectuals protested against his deportation, including Thomas Mann. Eisler remigrated to Vienna and moved to East Berlin in 1950. He composed the national anthem of the German Democratic Republic and was a key figure in the establishment of the musical scene in the GDR.