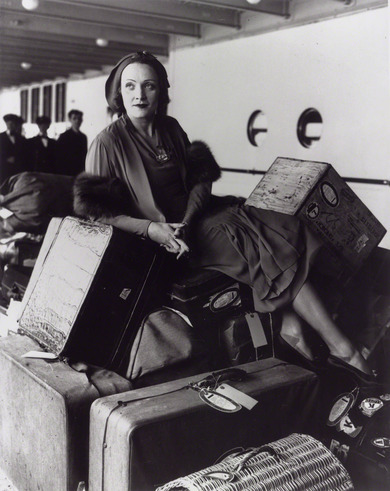 [It is not an easy decision to change your nationality, even if you suddenly despise the opinions and methods that your birthplace espouses. Even if you try to persuade yourself of the opposite: to have to repudiate everything that as a child you learned to honour, it makes you feel disloyal. The love and respect for the country that has welcomed you has nothing to do with this. (ed. trans.)]

Marlene Dietrich was never a political artist, nor did she flee the Nazis to the American continent. And yet she was consistent in her opposition to Hitler’s Germany and her support for the United States.

The actress and singer, whose Prussian education was evident throughout her life in her strict self-discipline, became one of the few German world stars at the beginning of the 1930s with the film The Blue Angel. She went to Hollywood with her director and the man who discovered her, Josef von Sternberg, and they produced seven films together. The German government made multiple attempts to bring her back; even Joseph Goebbels is said to have been involved. But Marlene Dietrich detested the “Third Reich” and its ideology and after Hitler came to power she only went to Austria or France when she visited Europe. In 1937 she applied to become a U.S. citizen and moved permanently to the U.S. Permanent residence in the USA was a requirement for citizenship. She officially became an American in 1939.

The Berlin native took a clear position in the war between her new and old homes. She toured for years in the United States and Europe to promote war bonds and to entertain the American troops. Her German audience could not forgive these actions. She was spat and booed at performances in Germany in 1960.