[Fleeing from my countrymen
I have now made it to Finland. Friends
I didn’t know yesterday put up a few beds
in clean rooms. From the loudspeaker
I can hear the victory messages of the scum. I
study the map of the continent with curiosity. High above in Lapland
right up to the Arctic Ocean
I can still see a small door. (ed. trans.)]

Was Bertolt Brecht an emigrant? He didn’t see himself as such. Brecht constantly fought against the use of the term, which implies a freedom of choice that expellees were not given. In 1938, his friend and colleague Berthold Viertel wrote the following about him: “You don’t want to be a German political emigrant, just an expellee, chased away, whose thoughts, feelings and plans tirelessly circulate on German soil, on the German people. Their future becomes that of your own, and the present defiantly estranged.” (ed. trans.)

Before Brecht fled Germany in 1933, he was one of the best-known playwrights in Germany. In 1922 he celebrated the premiere of In the Jungle of Cities in Munich – but the second performance was interrupted by the Nazis and dropped shortly after. By the time the premiere of The Threepenny Opera took place, Brecht had also become well-known outside Germany.

Brecht was in hospital during the Reichstag fire on 27 February 1933. However, he managed to leave that same day and packed his most important things together – his manuscripts in particular. Together with his wife Helene Weigel, he escaped to Switzerland via Prague and Vienna and then to Svendborg in Denmark. After the German troops invaded Denmark, he moved on to Finland. In May 1941, Brecht received a visa for the USA. He spent six years in Los Angeles, where he was part of a German exile community, whose members also included his friends Lion Feuchtwanger and Hanns Eisler. However, Brecht never became truly popular there.

After Brecht was examined by the House Committee on Un-American Activities, he went to Switzerland in 1947, the only land where he was able to obtain a residence permit. From there, Brecht probed the development of theatre in East Berlin and returned there in 1948/1949, where he became one of the central figures in the culture industry of the early GDR as both a writer and a playwright. 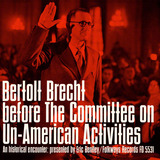