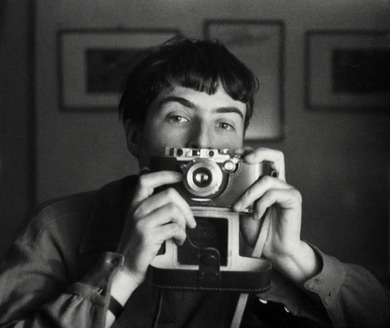 [In 1953 I returned after 20 years to visit my parents [...]. I was very disappointed that nothing moved me. [...] The places [...] – the entire geography of the city – none of it satisfied the longing that I had been carrying with me half unconsciously. And this longing still exists today, because it is only symbolised by the things back then. It is a home-sickness that I can no longer find a home for today. (ed. trans.)]

Ellen Auerbach first of all studied sculpting in Karlsruhe and Stuttgart from 1924 until she went to Berlin in 1929 to learn photography under Walter Peterhans. It was there that she met the photographer Grete Stern with whom she worked and lived together from then on. The two photographers took on Peterhans’ photo studio when he went to Bauhaus in 1929. Under the name ringl+pit, Stern and Auerbach specialised in advertising and portrait photography. However, success eluded them. In December 1933, the Jewish Ellen Auerbach emigrated to Palestine. In Tel Aviv, she and her childhood friend Liselotte Grschebina opened a photo studio for child portraits and called it Ishon (eyeball, pupil).

Auerbach’s photographic style changed in Palestine. Instead of perfectly lit still lives, she now turned to photographing landscapes, townscapes and children. Following the Arab unrest in 1936, she had to close her studio and moved to stay with Grete Stern in London for a while. As she did not have a permanent residency permit for Britain, she decided in 1937 to emigrate to the USA. Before that she married her partner Walter Auerbach and assumed his name. In the USA Auerbach made a living doing commissions. However, artistic recognition as a photographer still eluded her and it was not until the 1970s that Auerbach, after she had already worked for some time as a child therapist, saw her photographic work rediscovered in the USA.