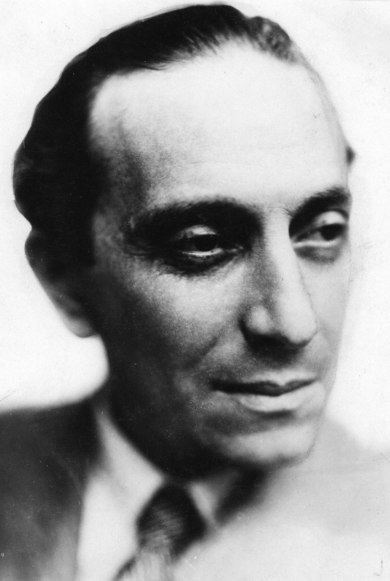 [In Paul Abraham’s career, fast success and personal defeat happened more closely together than in almost anyone else’s lifetime – something that not only shaped the composer’s life in a tragic manner, but also one that left its traces in his stage work. (ed. trans.)]

The Hungarian composer Paul Abraham had an enthusiastic following in Berlin from September 1930. His breakthrough came with the operetta Viktoria und ihr Husar (Victoria and her Hussar) at the Metropol Theater, known today as the Komische Oper. His speciality was jazz interludes which were completely unheard of in operettas before that. This new sound was achieved by a complete jazz band supporting the orchestra. The Berlin audience loved this innovation and Abraham received commissions to compose film music from the UFA studios.

His operetta Ball im Savoy (Ball in the Savoy) premiered in Berlin on 23 December 1932 and was to be his last operetta in Germany. Paul Abraham, who was Jewish, left Berlin right after the Nazis came to power; it was at the peak of his rapid and brief career. From Budapest he emigrated to Paris in February 1939 and one year later fled to Casablanca where he got by as a pianist before continuing on the New York via Havana.

Although Paul Abraham had a command of all genres, he was unable to establish himself as an entertainment pianist on Broadway. The American audience had very different expectations of the European operetta. Jazz, which had been vital to Abraham’s great success in Germany, was strange to US musical tastes at the time: in their opinion, jazz was completely out of place in an operetta.

At the beginning of the 1940s, Abraham became seriously ill and this resulted in more than ten years in a psychiatric clinic in Queens. A friend, the Hamburg film producer Alexander Paal, managed to bring Abraham back to Germany in 1956 and he spent the last years of his life in Hamburg.