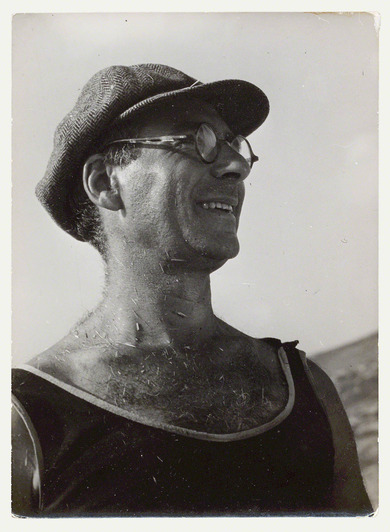 [We live in two-room wooden barracks, a small number still in tents. The barracks have good proportions, and the rooms have plywood panels on the inside. Eva and I have a barracks to ourselves with the kids, two rooms of nine square metres of floor space each (3:3). (ed. trans.)]

Ludwig Strauss on the living conditions in Joknam, Bericht an die Freunde, 1937 (published 1990)

If other photographs by Walter Zadek present “a rather unsentimental reflection” of the hard work of the new arrivals in Palestine, as the literature scholar Hanno Loewy writes (Walter Zadek, Kein Utopia …, 1986), with this photograph you have to look at both the front and back sides at once to grasp the “unsentimental” story that is being told.

The front shows a carefully shaven man in a work shirt who, smilingly – perhaps optimistically – looks toward a point in the distance. Stuck to his chest are some pieces of grass, presumably from his work in the field. The round horn-rimmed glasses and chequered cap with which he protects himself from the sun seem a bit out of place in the context of farming work.

Zadek's comments on the back reveal the identity of the subject: “The German-Jewish writer (from Aachen) Ludwig Strauss at the Joknam kib[b] near Haifa. 1937 (portrait with chaff)”. The line of poetry that Zadek added – “Ein deutscher Dichter bin ich einst gewesen” [“Once I was a German poet”] – is from the writer Max Herrmann-Neiße, who penned the verse in his London exile in 1934.

The writer Ludwig Strauss was dismissed from his position as a university instructor in Aachen for being a Jew in 1933 and emigrated to Palestine in 1935. In late 1936, he moved with his family from Jerusalem to the Hasorea kibbutz, to which the Joknam settlement belonged. In his aforementioned Bericht an die Freunde [report to friends], he writes of the arduous construction work and living conditions in the kibbutz.