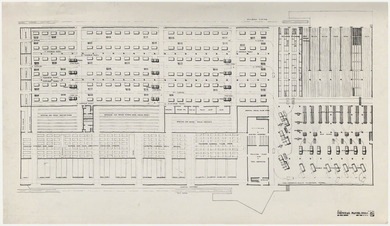 [Each machine was invented, designed, built and tested by me in a pilot model in New York. (ed. trans.)]

On 8 August 1944, the architects Walter Gropius and Konrad Wachsmann successfully registered a patent for their prefabrication General Panel System (GPS) during their exile in America. The so-called “Wachsmann-Knot”, a metallic connecting node, was used to join wooden panels. With this system prefabricated buildings could be constructed within a day.

The production of the first models proved to be laborious. The war had caused a metal shortage. Gropius and Wachsmann casted the first connecting pieces from waste material from the Harvard Press printing press. German craftsmen were also difficult to find owing to their unpopularity in the US. The plan to build a factory slowly matured and in 1945 the first designs were drawn up, of which this drawing was a part.

At the end of the war in 1945 a high demand was forecast for apartments for soldiers returning from Europe. At the time, there were many empty factory buildings in the western United States. Wachsmann went to Los Angeles and founded the General Panel Corporation of California in Burbank.

The architect created an almost fully automated factory for standard components in just three years. The hall was so large that workers drove by car through the factory to get around during the assembly process. Success proved to be elusive however. By 1948, only 200 homes had been sold. Americans were not taken with the functional design. Wachsmann left the company in 1949.