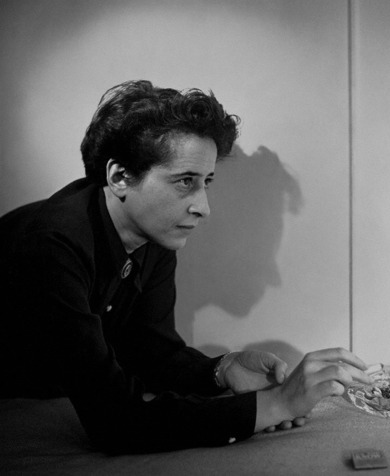 Philosopher in a contemplative pose

It is my honest opinion that you are one of the best portrait photographers of the present day.

Hannah Arendt in a letter to Fred Stein

Fred Stein photographed the philosopher Hannah Arendt several times between 1941 and 1966. After fleeing the Nazis Arendt lived for some time in Paris. In 1941 she emigrated with her second husband, Heinrich Blücher and her mother to New York. Here she wrote articles for the German-Jewish magazine Aufbau and worked as a research director and later as an editor. Fred Stein took this portrait photograph of Arendt in 1944.

After the war Hannah Arendt undertook regular trips to West Germany. She only achieved international fame through her – at first highly controversial – report on the trial of the Nazi functionary Adolf Eichmann (Eichmann in Jerusalem: A Report on the Banality of Evil, 1963). In a letter to Arendt in 1964, Fred Stein wrote to her approvingly: “Your Eichmann report is valuable not only because it will keep the debate alive long after the end of the trial, but also because it is, almost throughout, so full of urgency and responsibility in the matter itself and in its tone, […] in the near future, with a more objective view of history, it will certainly be praised unreservedly”.