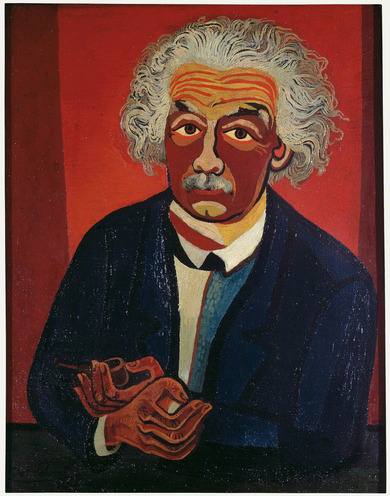 The Nobel laureate Albert Einstein and the painter Josef Scharl first met in Berlin in the 1920s. A decade later, scientists and artists were no longer welcome in Germany in the worldview of the Nazis. Einstein was forced to stay in the US after the Nazis seized power in 1933 while he was on a research visit there. Scharl also emigrated from his native city of Munich to the United States in 1938.

In order to speed up his local application for naturalisation, Scharl sought a guarantor in 1942. He remembered Einstein and asked him for his help. The scientist wrote to Scharl in support of his request. The rekindled acquaintance turned into a friendship in exile. Einstein visited Scharl frequently, who drew and painted him multiple times. In 1944 Einstein sat for an oil portrait. It shows the professor in a painting style typical for Scharl at that time. Contrary to earlier times, the artist now used brighter colours and emphasized the counters more strongly.

The closeness between the sitter and his portraitist held until the latter’s death in 1954. Einstein was too ill to attend Scharl’s funeral in person. A representative read a eulogy for his deceased painter friend on his behalf, in which he paid tribute to Scharl as a major artist.