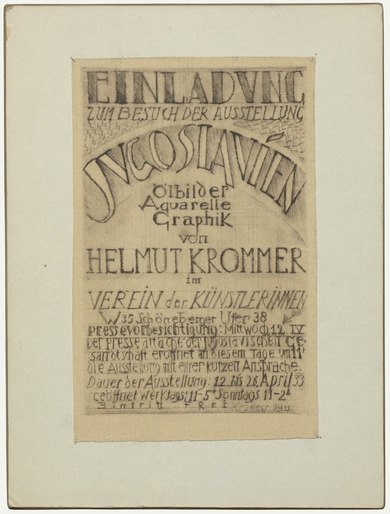 For the painter and graphic artist Helmut Krommer 1933 initially saw him enjoy the professional success and happiness that his friends had wished him on a New Year's greeting card. In Berlin in April 1933, Krommer exhibited oil paintings, watercolours and works of graphic art with Yugoslavian motifs. The artist himself etched the invitations which contain all of the relevant information in various different fonts. However, Krommer's life changed radically during the week of the exhibition.

The exhibition in Berlin held by the Association of Women Artists in Berlin was well-received by art critics. However, in spring 1933 Krommer had other things on his mind than reviews. Shortly after the Nazis seized power, the artist fell from grace due to his involvement with the social democratic cause and his contributions to the party newspaper Vorwärts. His house was searched and he was insulted. In addition to his political involvement, his wife was also Jewish. The tense situation led the family to decide to emigrate from Germany and on 1 May 1993 they travelled to Prague. This major step was taken shortly after the end of his exhibition in Berlin.

Instead of a happy and successful year, 1933 was a time for letting go and making far-reaching changes for the artist and his family. Letting go also applied to Krommer's artworks. He was not able to take along the pictures he had just exhibited in Berlin. The Yugoslavian embassy moved quickly, took on five of the pictures and sold them on commission for the exiled artist.