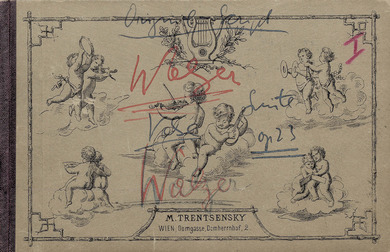 On 19 February 1939, as part of a fund-raising campaign during the winter of 1938/39, the American Guild for German Cultural Freedom provided manuscripts for auction at New York’s Delmonico Hotel. There was very little interest in buying among those attending the auction, despite the fact that music manuscripts from the likes of Kurt Weill, Ernst Toch, George Gershwin, Erich Wolfgang Korngold and Arnold Schönberg were on offer. The only item sold was Gershwin’s manuscript.

Because of this, the American Guild remained in possession of three manuscripts by the composer Erich Wolfgang Korngold which are now to be found in the German Exile Archive 1933-1945 of the German National Library. It is not known why the most interesting item among these, a small notebook containing the manuscript of the second movement Valse from the Suite for 2 violins, cello and piano left hand (Op. 23), was not sold. While the composer had not gone to the USA in exile until the annexation of Austria, he was already known there before that because he had been a successful composer of film scores for Hollywood since 1934. Paul Wittgenstein, who had commissioned the piece and to whom it was dedicated, had performed several successful concert tours across the USA in the 1930s and had also performed Op. 23 before emigrating to the USA in 1938. The Suite was the second piece that Korngold wrote for Wittgenstein, who had lost his right arm in World War One. The first was a piano concert he had composed for the pianist in 1923/24.