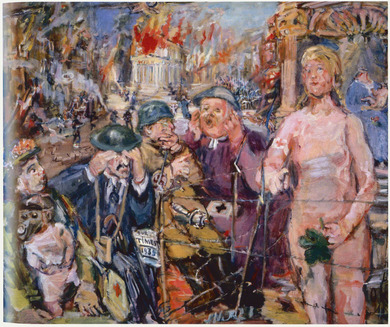 [I reiterate: I did not paint these images because I felt politically motivated in one direction or another. The only reason I stayed in England was to see the war from the other side of the barricade. The people resemble each other. (ed. trans.)]

Anschluss – Alice in Wonderland is a political painting by Oskar Kokoschka, produced during his exile in England. At first Kokoschka gave the work the ironic title Alice in Wonderland, and only later added the word Anschluss, a clear reference to the annexation of Austria by the Nazis.

The burning city portrayed in the background is Kokoschka’s native Vienna. Alice, symbolising truth, stands nude at the bottom-right of the foreground, fenced in by barbed wire. Directly beside her at the centre of the canvas are three male figures gesturing like the three wise monkeys of Buddhist lore: hear no evil, see no evil, speak no evil. The figures are wearing English, German and French steel helmets, respectively. This is a reference by Kokoschka to the role played by all three nations in deciding the fate of Vienna. They would rather not know the truth of the disaster they have failed to prevent in Kokoschka’s native city. On the left foreground, a woman is holding a baby wearing a gas mask. She looks over at the naked Alice in dismay.

Anschluss – Alice in Wonderland can be read as stark criticism by the painter of the Allies’ reticent reaction to Hitler’s aggressive military programme.