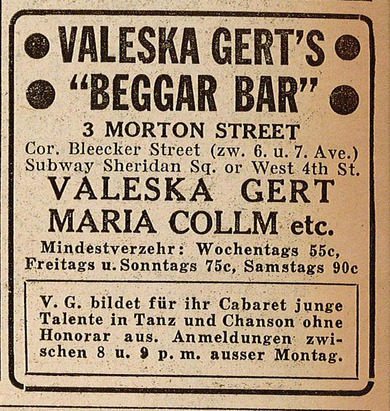 [I called the place Beggar Bar, since everything had been funded by begging. (ed. trans.)]

“A barrel isn’t a table, you don’t sit on crates for transporting mineral water, and the couch just doesn’t belong here.” So read the objections of the Greenwich Village police inspector, which Valeska Gert’s cellar restaurant, Beggar Bar in the corner of Morton Street and Bleecker Street, was obliged to publish at its opening. The neighbours in the peaceful emigrant community of the district were also nonplussed. They feared scandals. Eventually, Valeska Gert persuaded them that her bar, lacking an alcohol counter and furnished with only modest resources, was intended to serve primarily artistic purposes.

Gert came upon the idea of founding the bar thanks to the young writer Tennessee Williams, who also wanted to work there as a waiter. She had brought much experience of cabarets with her from Berlin, along with her programme, which she changed every evening and performed to a piano or accordion accompaniment. Valeska Gert, as could soon be read in Aufbau, danced, laughed, bellowed and squeaked in “all languages of this confused world.” Other artists too, such as Kadidja Wedekind and Maria Collm, appeared here. Valeska Gert gave new talents free instruction in dance and singing. The Beggar Bar was able to survive four years, despite constant financial difficulties.

After Valeska Gert left New York, she founded Café Valeska in Zürich in 1947, the Hexenküche (Witches’ Kitchen) in Berlin in 1950, and the Ziegenstall (Goat Stable) in Kampen on Sylt in 1951. Nonetheless, the stories about the Beggar Bar in New York remained legendary.