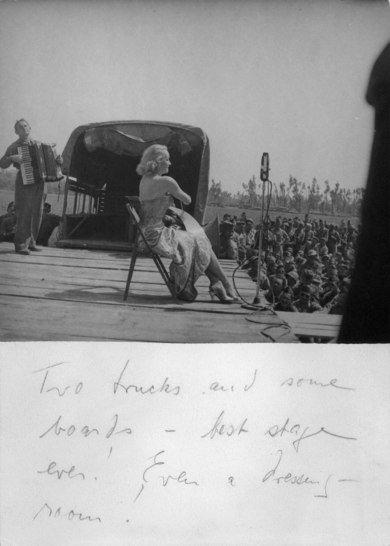 Marlene Dietrich was taught to play on the musical saw during shooting in summer 1927 by her fellow actor Igo Sym, who gave her the instrument as a farewell gift. She took the saw with her to Hollywood and astonished directors and crew with her playing on the set of at least six films. But the musical saw was never used in any of her films. It was only during her engagement entertaining US troops in 1944/45 that Marlene Dietrich performed with the instrument. There were roars of enthusiasm whenever she hitched her skirts to play on the saw for hundreds of soldiers on a stage improvised from the loading areas of two trucks. Some of her performances with the musical saw were also broadcast on American radio, e.g. in Milton Berle’s road show Let Yourself Go on 20 June 1944.