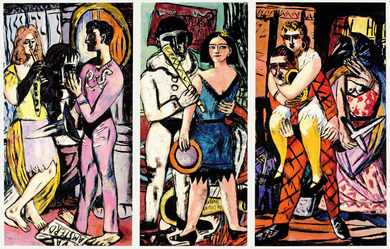 In 1942 and 1943 Max Beckmann painted another of his triptychs while in exile in Amsterdam: Carnival, also referred to as “Carnival in Amsterdam” in his list of pictures and initially titled Adam und Eva in his diaries. The second title can be found in the inscriptions of the left and centre pictures. This gives the work a closer relationship to the city, even if this “carnival” arose as an artistic image here and did not actually take place in Amsterdam. For Beckmann, carnival has a similar meaning as theatre or circus – an event of costumes and masks and semblance, which, for the artist, are symbolic of life itself.

The main figures are three couples and each picture features high degrees of variations on one colour: as their colour schemes the left picture has blue, the right picture has red and the centre one has green. On the left, two young people are depicted, a blonde lady playing a flute in yellow and to her side a black-haired man in a violet jersey with a sword in his hand. In between the two there is the large head of the bust of a youthful man. It could be a seduction scene and the seduction seems to have been successful and have resulted in an act of original sin. This lends the bust a divine nature, large, dark, remote, omniscient and also expressive.

Such an interpretation of the left picture is reinforced by the right one, as this clearly depicts the expulsion from Paradise. The name of the hotel [ED]EN is a clear reference to this. The complete name can be seen on the boy's cap. In addition we see the strange figure, whose long, pointed head is similar to that of the Egyptian god Seth, but whose feathers and sword indicate an Old Testament cherub, who guards Paradise after the Fall of Man and one of whom is driving away the couple in this picture. There was a large hotel in Berlin called the Eden and Max Beckmann was a frequent visitor there over many years. Now the name of the hotel represents Berlin, a former paradise, and being turned away means going into exile. The couple go on their way with a serious, pained look, the woman on the back of the man. It is therefore a self-portrait, even if the man in the picture does not directly resemble the artist.

However, the artist can be recognised in the Pierrot of the central picture. Wearing a white jersey, with a pale face and black, fathomless eyes, he is Death who is holding a young woman in his arms. Death and the girl is a well-known theme, especially in early German art. Max Beckmann depicted polarity in this couple: he compressed them in a narrow format, a cramped space and made them to the centrepiece of his triptych. As an analogy to the biblical story, the picture shows the scene after the expulsion from Paradise: mankind is no longer immortal and must fear death. We can also see the embodiments of life and death in the man and woman – and therefore the all-essential polarity of existence in the triptych – also in the events shown on the side panels.

The yellow bag on the ground is labelled “DA ORIENT[E] SUMAT [LUX]”, a well-known expression, which in another version is stated as “EX ORIENTE LUX” – light comes from the east. Was Max Beckmann using this expression, which was originally a reference to the birth of Christ, to allude to the events of the day? At the end of January 1943, when his work on the triptych was far from over, the German army had suffered serious losses in Stalingrad. For many this was a turning-point in the war. It is possible that the artist added this expression of hope after these events took place. Many of his diary entries show that he was following the unfolding of the war in Russia. For example on 30 June 1942 he wrote: “Renewed fighting in Russia” or on 10 July: “Enormous battles in Russia”, on 2 July 1943: “Sevastopol has fallen” and on 6 July: “Fighting has broken out in Russia again”.