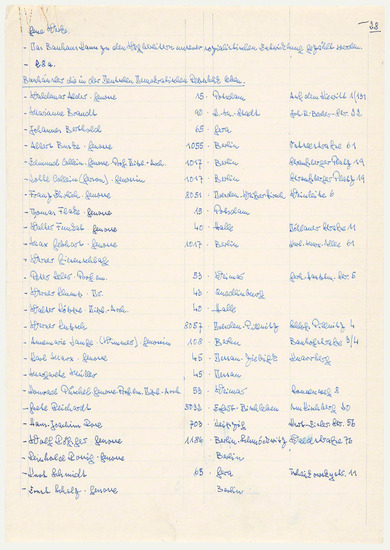 Handwritten manuscript from Konrad Püschel, list of names – looking for former Bauhaus teachers and students, not dated (after 1972)
Stiftung Bauhaus Dessau, I 43377

Konrad Püschel in his memoirs, 1997

On the occasion of the 50th anniversary of the opening of the Bauhaus Building in Dessau in 1976 and in order to plan colloquiums, the former Bauhaus student and later professor at the University for Architecture and Civil Engineering in Weimar, Konrad Püschel, collected the addresses of former Bauhaus teachers and students. Under the heading “Bauhaus teachers and students who evaded fascism by emigrating to (knowlege gap): USA, Israel, France, South Africa“ he created an overview of the countries to which his former teachers and classmates had emigrated. He attempted to restore contact to many of these after 1945.

Püschel belonged to the group of authors who published Kunst und Literatur im antifaschistischen Exil 1933 – 1945. Band 1: Exil in der UdSSR (Art and Literature in Anti-Fascist Exile 1933 – 1945. Volume 1: Exile in the USSR) and had an advisory role in the publication of the next six volumes. Along with Hannes Meyer and other Bauhaus students of the Bauhaus class of 1930, Konrad Püschel himself went to live in the Soviet Union where he took on various urban development tasks until 1937.

During the 14 years of its existence, approximately 1,250 young people from all over the world studied at the Bauhaus, 155 of these received a diploma. Many of the students and a large proportion of the teachers left Germany due to the threat posed by the Nazis, and those who stayed in Germany often kept their earlier enrollment at the Bauhaus secret. The reasons and circusmstances of those who emigrated varied in each individual case. However, the principle motives were political persecution and/or Jewish  descent. Some Bauhaus teachers took up appointments at American schools where they were able to continue to spread the Bauhaus idea.