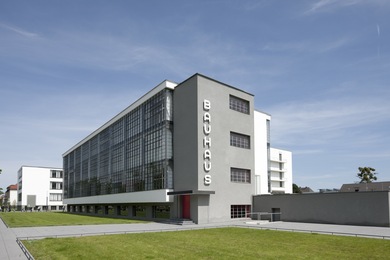 Bauhaus Building in DessauStiftung Bauhaus Dessau Bauhaus occupies a special position within the cultural, architectural, design and art history of the 20th century. As a design university, Bauhaus revolutionized artistic and architectural thinking and work on a worldwide scale and was decisive in paving the way for Modernism. The Bauhaus and its architectural monuments in Weimar and Dessau have been UNESCO World Heritage sites since 1996.

The Bauhaus building in Dessau, which was erected in 1925/26 based on designs by Walter Gropius, is the headquarters and the heart of the Bauhaus Dessau Foundation today. The institution, which was called to life on 9 February 1994, was set up with the aim of “preserving the historical Bauhaus legacy, while simultaneously  communicating this legacy and making it accessible to the public” and “making a contribution to resolving the problems facing design in today’s living environment using the ideas and approaches of the historical Bauhaus”. This objective is pursued and fulfilled by the Bauhaus Dessau Foundation in numerous research and design projects, exhibitions, publications, events and educational programmes. The Foundation was added to the list of cultural lighthouses in the new German states – the so-called “Blaubuch” (Blue Book) – in recognition of its work and extensive inventories.

In preparation for the important Jubilee year 2019, which sees the 100th anniversary of Bauhaus’ inception, at the end of 2012 five federal states came toigether at the Bauhaus building in Dessau with the three Bauhaus heritage sites in Weimar, Dessau and Berlin to form the “Bauhausverbund 2019” association.

Their work focuses primarily on the Foundation’s own research areas - the history of Bauhaus, the history of architecture, art and design as well as analyzing contemporary issues and developments in urban life. The Foundation presents its working results in the form of pilot projects, exhibitions, publications, conferences and in various educational activities, among other things.

Experimental stage projects, stage events and festivities are also part of the Foundation’s work and provide for a lively and creative atmosphere. The aim of the Foundation projects is to send out a signal both in Germany and internationally and to provide forward-looking solutions in matters concerning the design of urban spaces.

This is the first ever exhibition dedicated to the Bauhaus stage and its main protagonists Walter Gropius, Oskar Schlemmer and László Moholy-Nagy. By presenting their products, designs and concepts in a vivid manner, it shows how the Bauhaus stage was able to shape the symbols and images of a new modern subjectivity.

Issue 6 of »bauhaus« magazine takes a close look at Oskar Schlemmer - one of the most varied and famous Bauhaus designers of all time, who would have celebrated his 125th birthday in 2013 and who is now being rediscovered by the world’s great museums.

Pushing the use of renewable energies and the concomitant development of future technologies is the objective of “Energieavantgarde Anhalt” (Anhalt Energy Avant-garde), a location-based and innovative project that was launched in 2012. At the same time, energy-efficient buildings, production technology and energy generation in the region between Dessau, Bitterfeld and Wittenberg are presented to tourists, highlighting the region as a place where a forward-thinking and intelligent turnaround in energy policy is taking place.

Bauhausfest: The annual Bauhaus party takes place in the first weekend of September