Austrian Archive for Exile Studies at the Literaturhaus Wien

Austrian Archive for Exile Studies at the Literaturhaus Wien 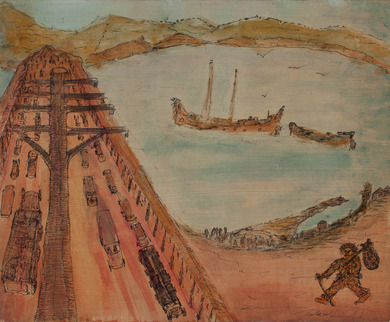 Jakov Lind Wanderjahre, watercolour, 1970'sAustrian Archive for Exile Studies at the Literaturhaus Wien Founded in 1993, the Austrian Archive for Exile Studies documents the life and work of Austrian writers and other cultural figures in exile and emigration after 1933/1938. It is the largest and most important specialised library in Austria on cultural exile. The archives and library focus on literature, theatre, journalism, music, art, cultural studies and the history of publishing. The Archive for Exile Studies is a library, workplace, event venue and information centre for researchers, journalists, students and others with an interest in the subject, as well as the artists themselves, their families and descendants.

Friends of the Austrian Archive for Exile Studies

Reference library (approx. 8,000 titles and 1,600 periodicals). The titles can be accessed via the Literaturhaus online catalogue. The library holds publications by Austrian writers in exile and emigration which appeared outside Germany after 1933, and outside Austria after 1938.

The output of publishing houses in exile for which Austrians worked

Documentation (in the form of newspaper cuttings, bio-bibliographical material, offprints, posters, etc.) of approx. 7,000 persons and sorted by keywords (e.g. countries of exile, organisations and professions).

Photographic portraits of Austrian creative artists in exile; collection of historical portraits and photographs with subjects related to exile

The Austrian Archive for Exile Studies introduces its work to the public through a series of events (more than 200 to date): conferences, workshops (also for school and university students), readings, talks with witnesses to history, exhibitions and publications of catalogues and books (approx. 40 to date). Many projects have evolved in cooperation with national and international institutions and publishing houses which work in similar fields.

The first exhibition Die Zeit gibt die Bilder (1992) showed more than 70 photographs by Alisa Douer. These captured her encounters with writers and artists, among them Billy Wilder, Anna Maria Jokl, Gerda Lerner and Max Zweig, who were of Austrian origin and had to flee in 1933 or 1938. Exhibitions about countries of asylum (e.g. Wie weit ist Wien, 1995, on Latin America) and other topics (e.g. Kleine Verbündete/Little Allies, 1995, on displaced authors of children’s books, and Geteilte Erinnerung, 2003, on generations of exile) followed. Individual exiles have also been highlighted (e.g. the writer Mimi Grossberg in 1999, the sculptor Anna Mahler in 2004 and the playwright, director and journalist Edmund Wolf in 2010).

Opening hours: Monday and Wednesday, 10.00 a.m. to 3.00 p.m. or by appointment
Please contact us in advance if you wish to use the manuscript collections
Guided tours: by appointment